Aqua is focused on the multi-disciplinary study of Earth's interrelated processes (involving the atmosphere, oceans, ice, and land surface) and their relationship to changes in the Earth system. The global change research efforts emphasized with the Aqua instrument data sets include atmospheric temperature and humidity profiles, clouds, precipitation, and radiative balance; terrestrial snow and sea ice; sea surface temperature and ocean productivity; soil moisture; and the improvement of numerical weather prediction. Aqua is also making critical contributions to the monitoring of terrestrial and marine ecosystem dynamics. Hundreds of Aqua images, along with Aqua data sets, can be found on the websites for the Aqua science teams.

The EOS Data and Information System (EOSDIS) provides the total ground system for processing, archiving, and distributing science and engineering data from all the EOS spacecraft, including Aqua. Earth Science Mission Operations (ESMO) provides the mission operations systems that perform the functions of command and control of the spacecraft and instruments, health and safety monitoring, mission planning and scheduling, initial data capture, and Level 0 processing. Command of all the EOS spacecraft and instruments is done at the Earth Science Missions Operations (ESMO) Project located at NASA's Goddard Space Flight Center (GSFC) in Greenbelt, Maryland.

On July 12, 2002, Aqua began broadcasting all of its instrument data (AIRS/AMSU-A/HSB, AMSR-E, CERES, and MODIS) on X-Band. With more extensive filtering capability on its transponder, Aqua is broadcasting almost all the time except during the ground contact time over the Poker Flat, Alaska, and Svalbard, Norway. Interruption lasts about 5 minutes, once per orbit. [Aqua's sister satellite, Terra, began broadcasting selected portions of MODIS instrument data on X-Band on March 17, 2000. The broadcast is continuous with following exceptions: 1. During the time Aqua is dumping its play-back data which lasts about 15 minutes, once per orbit; 2. When the spacecraft is in the line-of-sight of NASA Deep Space Stations (Goldstone, Canberra, and Madrid)].

Anyone interested in obtaining direct broadcast data or establishing a downlink site should refer to the EOS Direct Readout Laboratory. 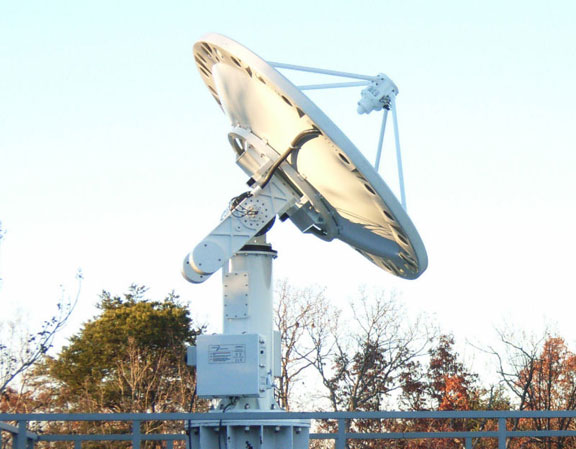